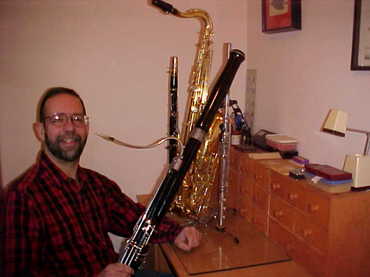 Tom was a member of the U.S. Army Band of New York City, and upon
leaving the Army, worked as a free-lance bassoonist/woodwind doubler
in the city.  He performed with numerous groups including Broadway show
orchestras, the Brooklyn Philharmonic, Goldman Band, St. Cecilia Orchestra,
back-up groups for artists such as Toy Bennett and Mel Torme, to name
just a few.  He also toured Europe with the International Company of
"A Chorus Line".  In Arizona, Tom performed with the Southern Arizona
Light Opera, Arizona Opera, and the National tour of "Will Rodger's Follies".
Upon moving to Chicago, he reformed the Bel Sonore Chamber Ensemble,
which has been quite active in the area's chamber music scene.  In Chicago,
he has worked with many groups including the Chicago Jazz Ensemble, the
Chicago Jazz Philharmonic, City Lights Orchestra, Ravinia Festival Orchestra,
Northwest Indiana Symphony, Elgin Symphony, subbed for shows such as
"Showboat" and played in back-up orchestras for artists ranging from Ray
Charles to Linda Ronstadt